Over the last few months, James Irwin and I (Ryan Summers) have been working on a pretty fascinating engineering project for the Palouse Robosub club, and I figured I would give a quick write up on it. I want to put a forewarning here that I am a computer engineer, and some of the language below may be a bit technical, but I’m putting an effort into keeping the jargon to a minimum.

In the competition, a major task (which awards quite a few points) involves a little bit of underwater acoustics. There’s a pinger somewhere in the pool that sends out pulses of sound every two seconds at anywhere from 25KHz – 40KHz. Through some clever triangulation algorithms (that are described here) and four different underwater microphones (from now on, I’m going to be calling these hydrophones), we have figured out that we can derive our position with respect to the pinger source by utilizing the depth of the pinger and of the submarine. It turns out the only pieces of information that we need is the different arrival times of the ping at four different hydrophones arranged in a specific configuration. Sounds easy right? It turns out it’s a bit more complicated than it first appears.

To set the stage for the difficulty of this project, we’ve had a variety of teams attempt to create a solution for the last four years, but none of them have been able to successfully deliver. These teams weren’t amateur engineers either – they were all full-fledged senior design teams. I even personally tried to take on the project with a half-baked solution of using a bare-metal raspberry pi project last summer with some minor success, but ultimately I didn’t finish in time for the competition. We’ve had a variety of ideas over the years and all of the different designs have helped to reform and refine our plans. This project has definitely taken both James and I out of our comfort zones, but I’m happy to see that it’s paying off so far.

An example of a cross-correlation. Taken from Giphy.

It turns out that the only way to effectively detect the ping (that we’ve been able to figure out so far, at least), is to continuously sample all of the hydrophones and perform a cross correlation (this means we basically slide signals across each other until they both overlap). Because of the sensitivity of our algorithm, we need to be able to tell the arrival times of the signal to within at least 1 microsecond, and the result needs to be fairly accurate. Otherwise, false positives can give us wildly different answers across different pings.

This effectively forms the basis of the problem. We have four hydrophones that we need to sample at a minimum rate of 1MHz each. Then, we need to correlate each of the signals to figure out the arrival time delays. Only then can we pass along that information to calculate our position. The hardware for sampling the hydrophones turned out to be more complicated than either me or James realized.

James and I had been eyeing the Zynq as a processor for this project. If you haven’t had the opportunity to work with the Zynq before, I would highly recommend it. It’s an extremely powerful device with a lot of potential for pretty much any project you throw at it. The Zynq 7010 boasts a dual ARM Cortex A9 processor suspended in FPGA fabric. Essentially, it’s a powerful computer surrounded by custom programmable digital logic. This means that you get the best of both worlds in terms of programmable logic and raw processing power because the processor can interact with the FPGA fabric as needed. We ended up selecting the LTC2171-14 as our ADC, as it could provide us simultaneous sampling on 4 channels from 5MHz - 65MHz, which was much higher than our initial requirement (go big or go home!).

We went looking around for Zynq development boards and came across the MicroZed. It was a pretty cool board that boasted expansion headers and differential trace routing. This meant that we could design our own circuit board to plug into the MicroZed and make sure to keep the differential traces safe. As a result of using the Zynq processor, the project has been dubbed the HydroZynq.

The layouts of revisions A through C are shown as the board gained complexity and decreased in size.

Now that we had our hardware selected, we moved on to figured out exactly how any of this was going to work. Neither James or I knew anything about how the Zynq worked, so we had a lot to talk about for the next few days.

The custom circuit board was the first thing on our to-do list. Board printing usually takes about a month until you have a board sitting in your hand, and it rarely works the first time. We wanted to give ourselves plenty of time to figure out all of the bugs to make sure the hardware worked properly. The hydrophones we were using were the AS-1 from Aquarian Audio (shout out to Aquarian – they were absolutely wonderful to work with and the hydrophones we purchased from them are top-of-the-line). After about two weeks, I had made the schematic and laid out the board. More details about the specific implementation of the HydroZynq are available on our Wiki. 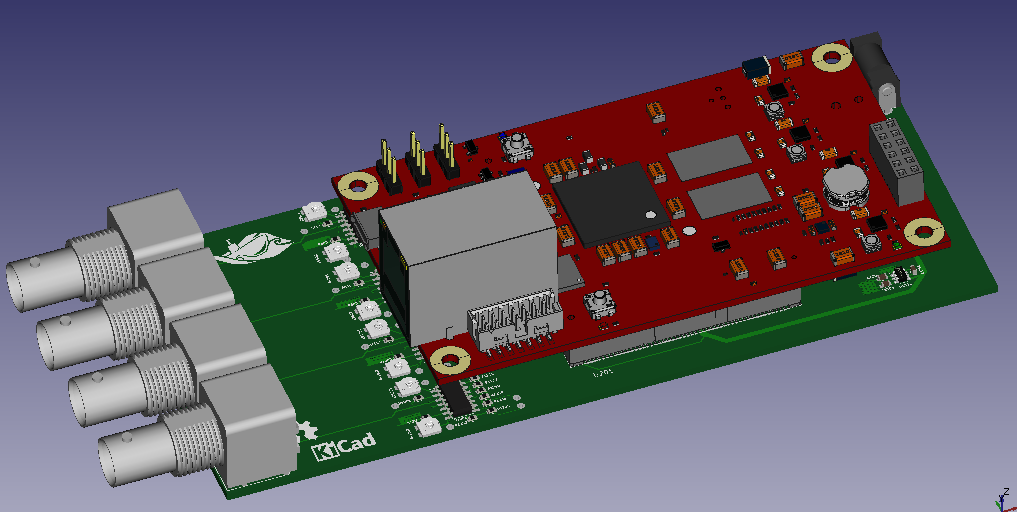 The first revision of the HydroZynq board with the MicroZed mounted to it.

The PCB came back as expected and I got to soldering it all together and made a fairly neat timelapse of the project. However, I realized halfway through soldering together the board that I had mirrored the two main MicroZed connectors. As a result, I had to do a lot of cut-and-jumpering to the board, but I’m happy to say that we managed to make the hardware work. Additionally, we found out that the FPGA I/O banks needed to be powered with 2.5V to utilize differential signaling. We had to cut out 1.8V power to it and supply an external 2.5V for testing.

A timelapse of soldering together the first version of the HydroZynq.

After soldering the board together, I got to testing it. Thankfully, there were some invaluable tools in debugging the hardware, FPGA, and software. The ADC chip has some options to output constant configurable data as opposed to the analog samples for testing. This means that you can tell it to give you a specific bit pattern, and each sample will be reported as that. This helps to verify the communication channel between the ADC and the FPGA. Additionally, Xilinx developed a tool called the Integrated Logic Analyzer (ILA). This allows you to record and probe different signals within the FPGA in real time. This was invaluable in debugging the hardware because I could look at exactly what the inputs to the FPGA were with nanosecond precision. It was this tool that was able to show me that a few of the pins on the ADC and connector weren’t quite soldered and didn’t have good contact.

The second revision of the HydroZynq is smaller and more powerful (and less buggy).

After initial testing, the bugs that we found were corrected and we developed a second revision of the board that was slightly smaller and easier to work with. We sent it out to the fabricator as we continued testing on the first revision.I made a timelapse of the creation of the board, but much of the internal routing footage got lost due to my screen recorder dying on me.

Timelapse of routing the HydroZynq for Rev B.

Construction of the HydroZynq's second revision.

After getting all of the hardware functional, software development and debugging moved on.We made a second revision of the board and continued debugging the software. Once the new board came in, we put it together and started testing in a real pool environment with actual pings. 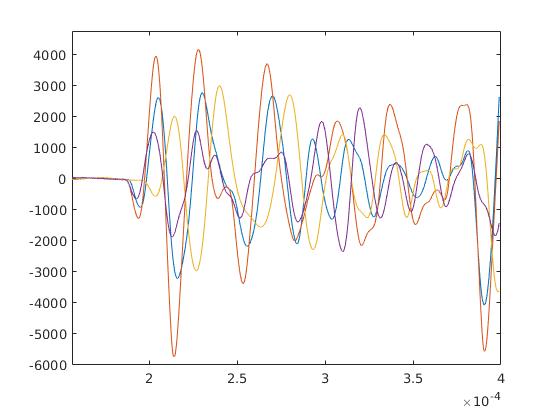 Ping data from testing in the pool was looking good!

After verifying some test signals, James and I moved on to testing the hardware with all of the hydrophones. After a bit of tinkering, we managed to convert the calculated arrival time delays into an angle of approach from the pinger. As we rotated the array and changed the heading towards the pinger, the hydrophone system correctly calculated the new angles. 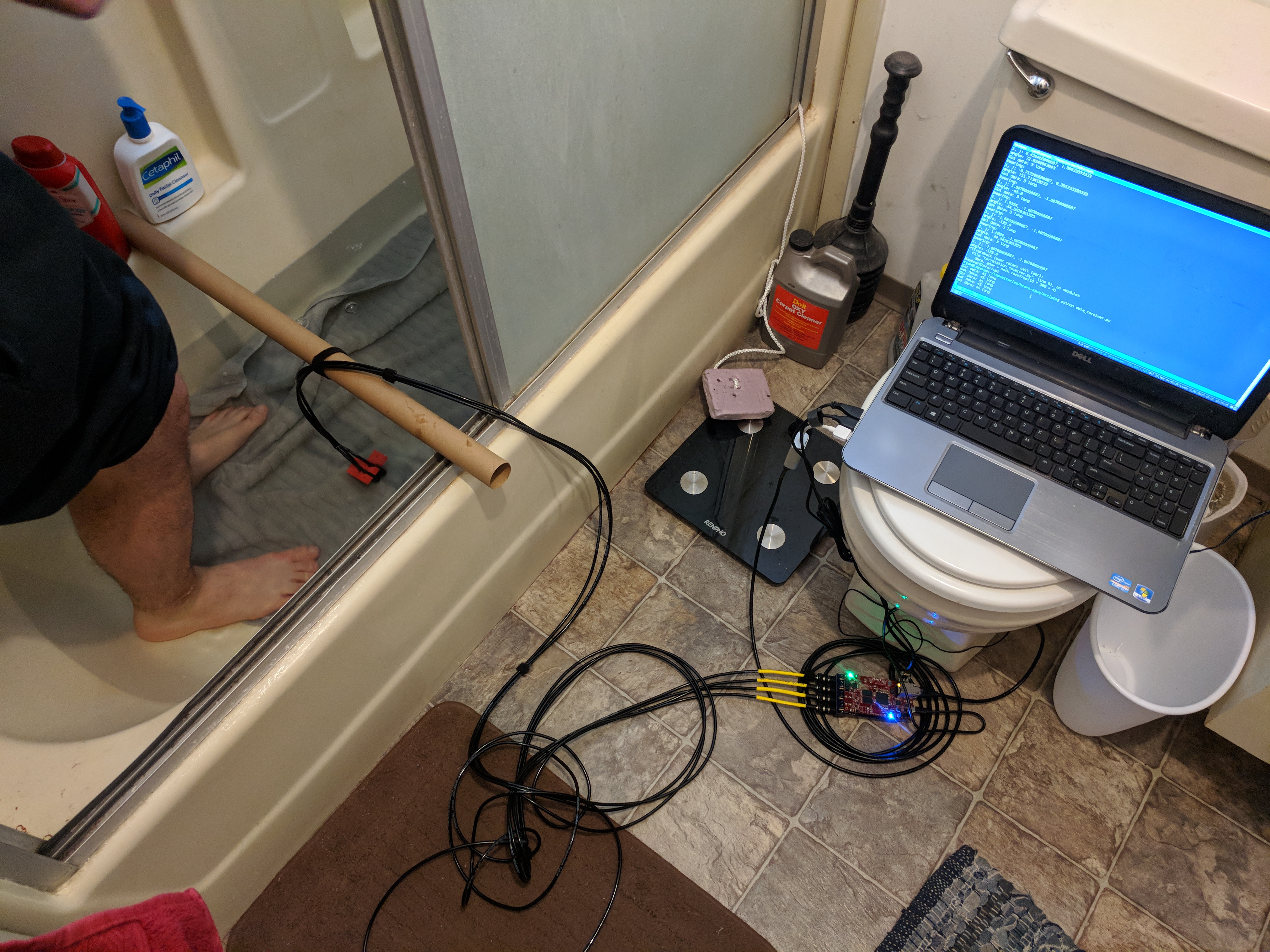 James and I had to rig up the system to test in the bathroom.

The correlations and data started to look pretty good.

After verifying the functionality in the bathroom for the second board revision and a few tests in an actual pool with four hydrophones, we mounted the system onto the submarine for testing. 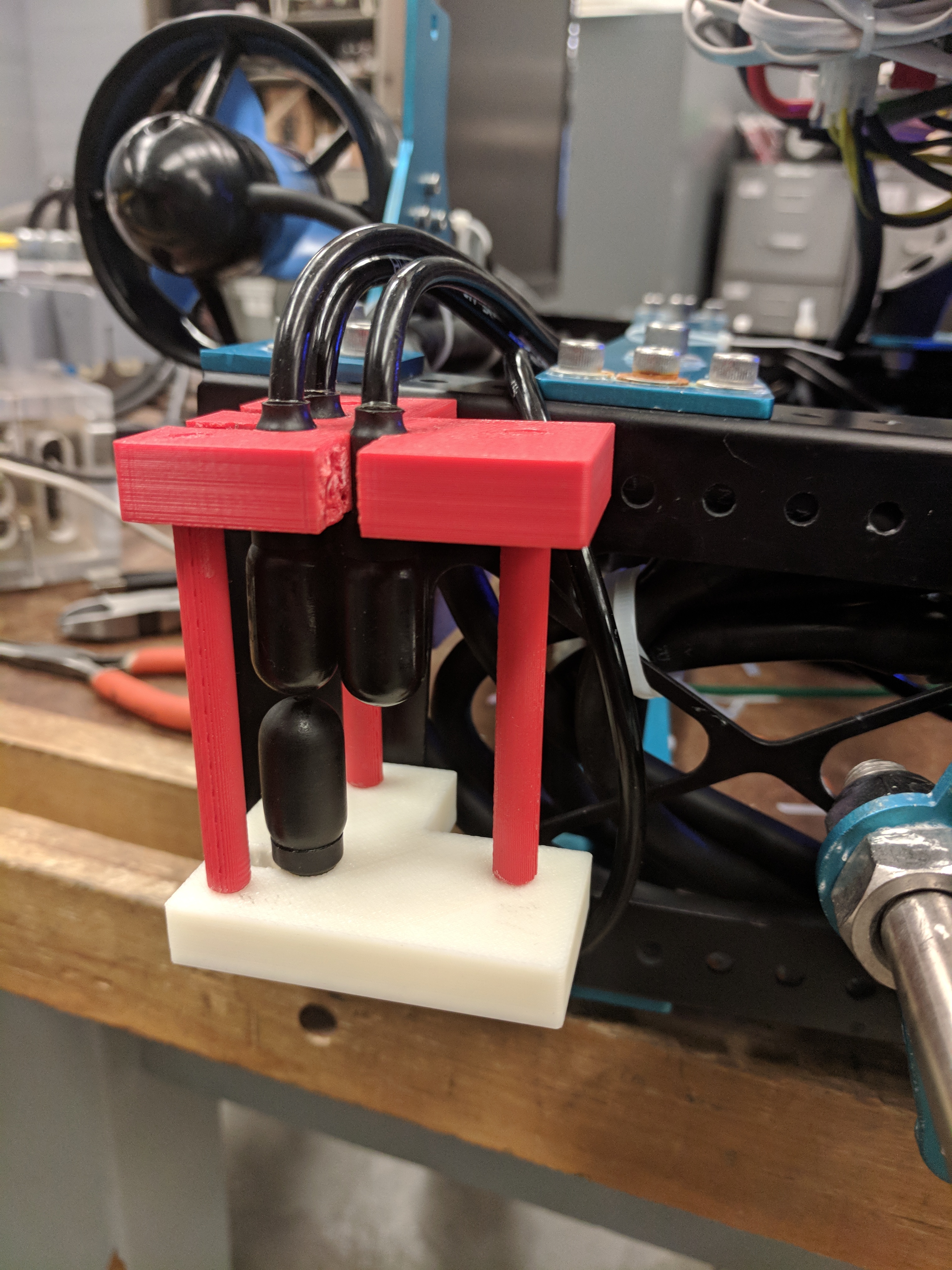 We've done some initial testing with Cobalt and were able to get headings to the pinger from all the way across the pool! We're going to be testing an AI that goes to the pinger next weekend and I'll try to post an update about how it does. 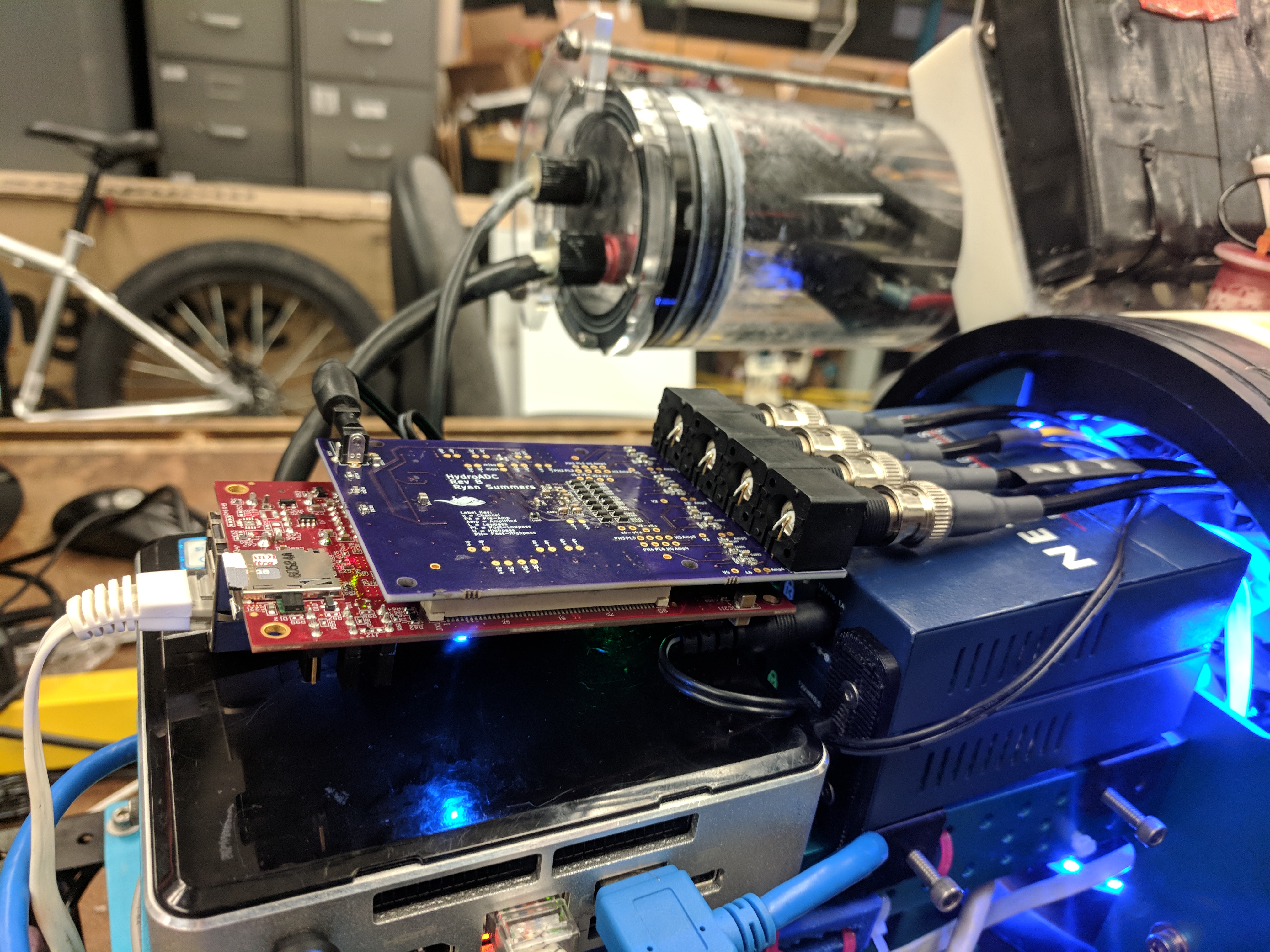 The HydroZynq kit hooked up to cobalt and broadcasting data.

We already have some changes for the final version of the board, and I'm sending out the design for printing soon. 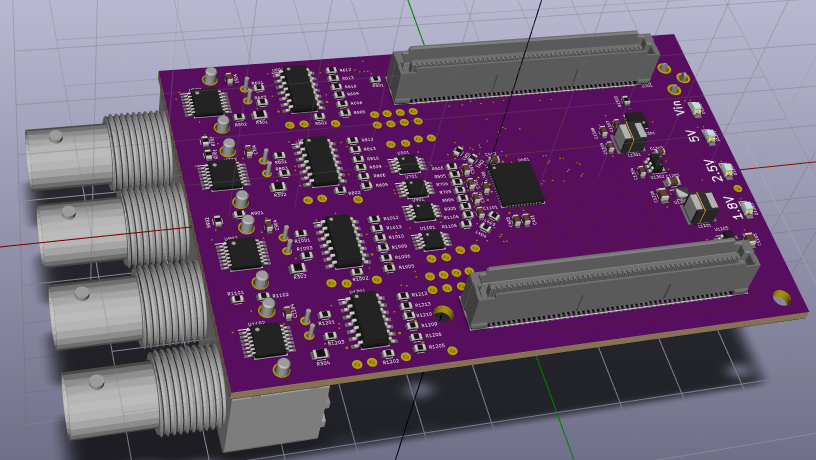 The final revision of the HydroZynq has some additional features built into it for digitally adjustable gain.