A few members woke up really early this morning (Sunday) to prepare for our third semifinal run. Again our sub went through the gate and attempted to hit all three buoys, but only successfully hit one. The rest of the day we spent talking with other teams about their subs and getting new ideas on how we'd like to improve our own for next year. In the afternoon we watched the top teams compete in the finals. In the evening we attended the awards ceremony, which was hosted in Old Town San Diego, and later socialized with other teams at the hotel.

Overall, we are happy with the performance of our submarine this year. While we did not hit complete all of the tasks we had planned, we came very close. In addition, our issues were mostly simply higher-level AI decision-making tweaks, instead of hardware or core software components, which has been the bane of our team since we started. I feel we are in a strong position for rapid improvement this upcoming year, for the first time ever we are happy with both our base mechanical, electrical, and software design, and have no major problems with them. Our mechanical design has proven to be sturdy, waterproof, relatively easy to work with, all while looking beautiful. The electrical design was extremely stable, we had no issues with loose or unreliable connections and all devices performed as expected. Our core software system (sensors, thrusters, and control system) has been well tested for months and shown to work well, while our new deep vision processing system performed better than any of us had hoped.

Final rankings for the top 5 teams were announced at the awards ceremony, ranking for all other teams will be released sometime in the next few months. We are not sure exactly where we fell in the ranking, but as far as we could tell our performance was around the middle of the pack.

We have been thinking about what sort of incremental improvements we would like to start tackling this upcoming year, planned and scheduled with a mandate of keeping the sub in a ready state to perform pool tests every two weeks.

We'd like to give a huge thanks to NAVSEA for sponsoring us, our university for supporting us, and of course the rest of our team for working hard all year round to get the sub to this point. Looking forward to next year!

This morning we got to Fry's Electronics right as they opened to acquire the parts we needed to fix our power case. We implemented the fix at the hotel, and made it to the TRANSDEC facility with 5 minutes to spare for our presentation to the judges. The presentation went well; the judges appeared to be especially impressed with our mechanical design.

We had a practice run at 1:45 pm, unfortunately it wasn't very productive because our computer was randomly restarting during the run. Afterwards we discovered it was due to the fact that our UPS battery wasn't working. We believe someone had forgotten to power off our main computer yesterday after shutting down the sub, which severely drained and damaged the battery. After replacing it with our spare, we were good to go for our semifinal run.

We had our second semifinal run at 3:45 pm, during which we were able to pass through the gate and hit the red buoy! The sub attempted to hit the other two buoys, but it looks like the AI timed out when trying to hit the green buoy, and we got caught on the red buoy's tether when going for the yellow buoy.

Later this evening, we found out we were selected for a wildcard slot tomorrow morning at 7:45 am, which means that we will be able to make another attempt at the course to improve our score. Our team has been reviewing our log files from our last run to see how we can modify our AI to be more robust in preparation for tomorrow!

This morning we downloaded the newly trained network weights for our vision processing, and they appear to perform very well. We had our practice run in the afternoon about an hour and a half before our first semifinal run. The practice run didn't go as smoothly as we had hoped due to a lack of coordination between the members of the software team, but after working out those bugs, we successfully hit a buoy within in the dolphin pool.

Following this testing and doing dry runs of our complete AI system we felt ready and confident for our semifinal run. We performed the run with no major software or hardware issues, and traveled through the gates 3 out of 4 attempts. However, it appeared that our AI was not transitioning to searching for the buoys as it should.

After our semifinal run we looked more closely at our log files and saw that our individual AI tasks (except for the first) all timed out without providing any outputs. We were puzzled at first, because we had just ran the same software 5 minutes before without any issues. After some thought, we realized the key variable that had changed between our tests in the dolphin pool and our semifinal run: we had to run completely untethered during the semifinal run. The way we had ROS (our communication framework) configured was such that it's reliant on the ability to perform DNS resolution between various computers, including our NUC (our primary computer), and our Jetson (the vision processing computer). Our router had always performed this DNS resolution, and this was actually the first time we ever tried to run our software since installing the Jetson without our tether (and therefore router) attached, so we never noticed the lurking problem. The NUC couldn't send camera images to the Jetson, and likewise the Jetson could not provide any vision processing results back to the AI running on the NUC. Without any information to operate on, the AI sat idle. After realizing the problem, the fix was quickly implemented and verified good.

Unfortunately, later in the evening we accidentally plugged the battery in backwards to the sub, which damaged our power control electronics. While the sub can still turn on, thrusters cannot be enabled. I myself made the same mistake back in June, and luckily the fix was fairly straightforward, just needed to replace a single MOSFET and a diode. We're pretty confident the same parts fried again, so we'll be stopping at a local electronics shop tomorrow morning to get the required replacement parts. Shortly after fixing it the last time I designed some protection circuitry to prevent damage should things get plugged in backwards again, but I never implemented it. Definitely regretting that now. We expect to be able to fix the power control electronics before our second semifinal run tomorrow (Saturday) at 3:45pm, however we may not get as much testing as we would have liked. However, that's the way things tend to go at this competition, it's rare for any team to not encounter an unexpected setback like this at least once during the week.

Our hope is to pass through the start gate and hit at least one buoy tomorrow, and hopefully all the buoys!

We found the key! Turns out it got caught in a tree. We had shaken the tree the night before in the hopes anything caught there would fall out, but apparently it was well stuck. The daylight this morning made it easier to see them where they were caught.

It's a shame the keys were not spotted before a few members went crawling through the dumpster for them, but at least it makes a good story. And the moral of the story: NEVER THROW KEYS!

During our time in the competition pool today we successfully used vissing to navigate through the gate, but missed the buoys. Unfortunately we experienced networking issues that prevented us from making another attempt. 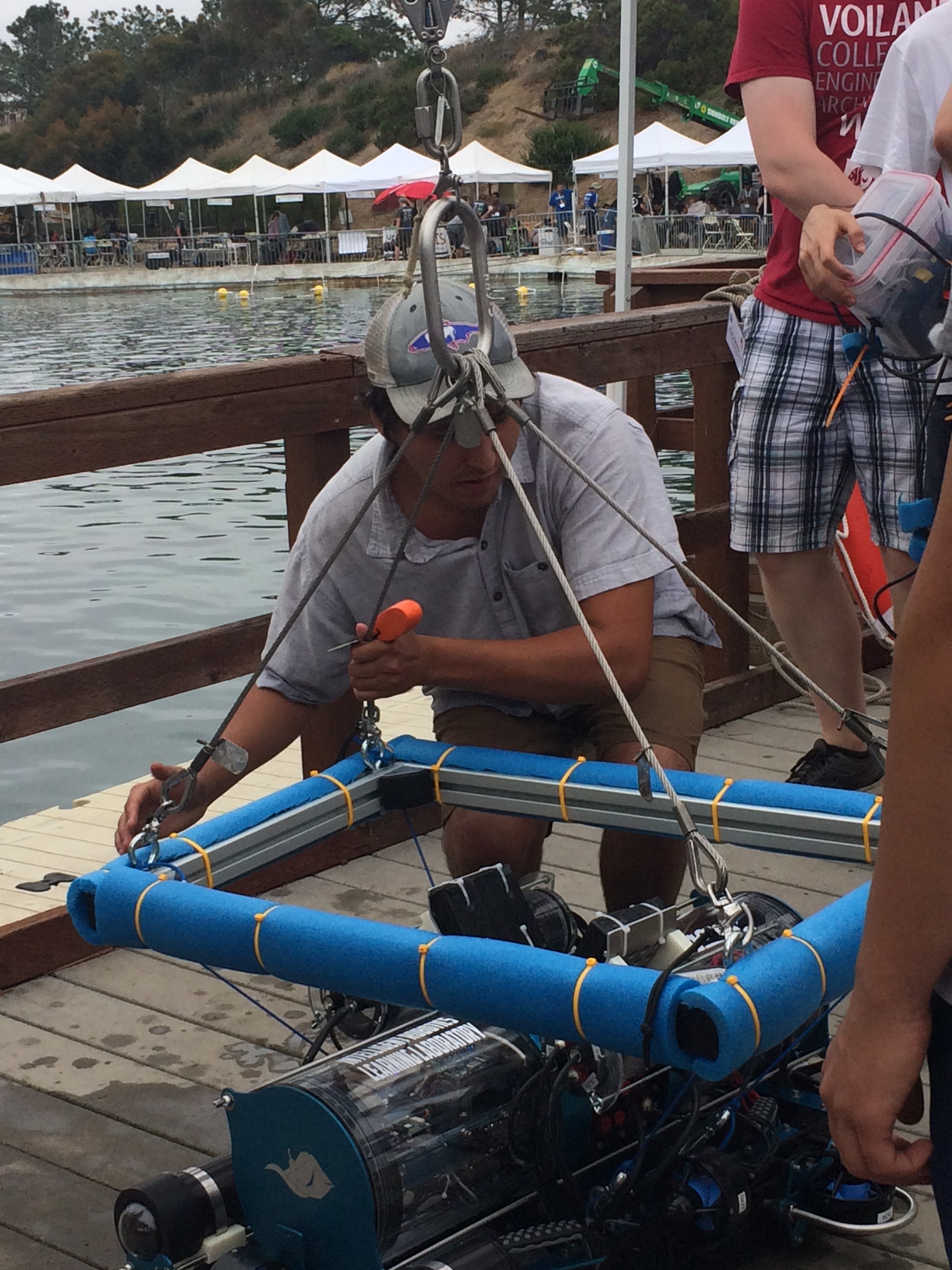 Throughout the week we've had various issues with our floating router setup. We've come to outgrow our original router, especially when streaming video, so we purchased a new router last year that is significantly faster and has better wireless capabilities. However, the new router has different power requirements than our old router and was causing our power regulator in the router box to overheat. We've been trying to resolve this issue throughout this past week, but we ended up falling back to our old router. While it is much slower, it at least doesn't overheat. During our last run the lid came loose from the router box, resulting in water leaking into the box and causing our network issues. However, after drying out our equipment our router seems to be working fine again. Given the frustrations our floating tether has caused over the years, we think we will change to using a full-sized tether that can reach the shore. This is a common strategy used by other teams and seems to work well for them.

After the competition we started to head out for dinner, and one half of the team tossed the car keys from their vehicle to other half. Unfortuately the catching half was not aware the keys were being thrown and did not see where the keys landed (nor did the throwing half). After over an hour of the entire team searching every square inch of the parking lot and and the dumpsters nearby we were forced to declare the keys lost as the sunlight disappeared.

Later in the evening our entire team labeled more vision data in preparation for our attempt at the finals tomorrow, focusing especially on the buoys to improve their detection. Our semifinal run is scheduled at 4pm tomorrow (Friday)!